Installing a ceiling fan is a great idea with massive immediate benefits for any homeowner. The increased popularity of ceiling fans in terms of the number of purchases and customer enquires is a testament to their value.

Here is a detailed instruction with easy to follow the instruction that will ensure installing a ceiling fan is a smooth and easy experience. 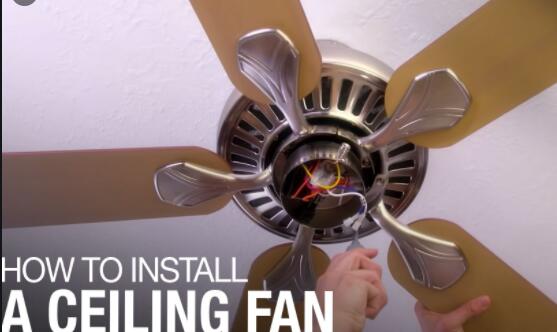 Before starting your ceiling fan installation procedure, it is crucial to take a step back and ensure your personal safety, here is what to consider:

• Ensure that electricity is disconnected from your home by switching it off at the circuit breaker box.
• Double check your electrical wire color codes and connections.
• Ensure you have the right tools and equipment.

Having the right tools and equipment not only ensures your safety but also guarantees faster and efficient finishing. Here are the basic tools you will need for the job:

Use a stepper ladder to reach your celling and ensure it is firmly on the floor.

Wearing safety glasses protects your eyes from the dust and debris that might be falling off from your celling as you’re installing the ceiling fan.

• Ensure that you check for any electrical precautions and safety tips in the user manual of the ceiling fan you want to install.

If you are confident that you have taken all the safety precautions then you are ready to begin installing your ceiling fan.

How to Install a Ceiling Fan? 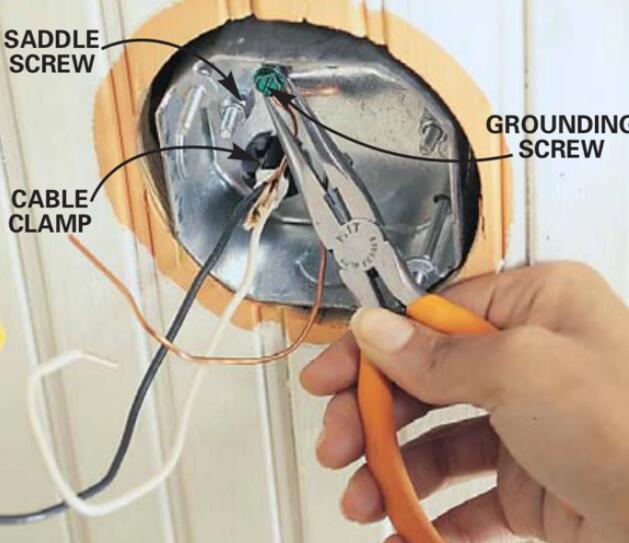 i. Unscrew the old electrical junction box from the ceiling.
ii. If nailed in, use a flat bar to pry it free.

i. Check for a long piece of wood directly above the hole once you remove your previous junction box. Use a light source if dark.
ii. If you can’t locate the piece of wood, check for two separate joints across the hole.
iii. Locate the studs on your celling. This can be easily done with a stud finder.
iv. If you locate the wooden joist then you can easily purchase a screw-in fan box.
v. If your fan box is larger than your ceiling box, hold the fan box on the hole and use a pencil to trace the dimensions on your new fan box.
vi. Cut on the traced line with a drywall saw and fit the fan box.
vii. Be careful not to cut excess ceiling walls.
viii. Once your fan box is firmly screwed in, thread the electrical wires through it’s center hole.
ix. Check if for a cable clamp, used to hold the wires in place, on your fan box. Firmly screw in the cable clamp.

i. Hold the Ceiling Bracket on top of the fan box and thread the electrical cables through its center hole.
ii. Screw-in the ceiling bracket plate on the ceiling joist.
iii. Ceiling brackets have different installation methods, ensure that you carefully follow the manufactures instructions to ensure that you install it correctly.
iv. Feel free to add any decorative attachments to surround the fitting.

i. Look for a long rod on your ceiling fan kit. This is the down-rod used to distance the fan from the ceiling.
ii. Using the manufactures instructions or the user manual, keep the rest of the fan body on the floor and attach the down-rod to it
iii. Thread the fan cables through it.
iv. Tightly screw in the down-rod on the fan body. Check for locking screws that come with your fan kit.

i. Ask someone for a hand to lift the fan assembly towards the ceiling.
ii. Once you are sure about your electrical wire color codes, connect the wires. The neutral wires usually have a white, green, or brown insulation.
iii. Keep in mind that wiring schemes are different depending on different ceiling fan manufacturers. Check your user manual for more details about your ceiling fan kit.
iv. Insulate the connection of the wires and ensure they do not touch. You can use an insulating tape for this.
v. Enclose the wires into the fan box once you are done with the wiring.
vi. Attach the canopy of the fan over the fan box so as to cover the wiring socket by firmly screwing it in.

i. Most fan blades are attached to the fan motor so check for screw slots and fit the fan blades one after the other and ensure you tightly screw them in.

ii. If your fan kit has light fixtures, use the user manual to connect the wires.
iii. Ensure you secure the naked connections with insulating tape.

9. Turn On the Power

Once your certain everything is correctly wired up and firmly fixed you can turn back the power and switch the fan kit on. Let it run for a while as you inspect for any loose connections and make sure everything is working as it should.

How Much Does It Cost to Install a Ceiling Fan?

i. Without existing wire

If you are going to be installing a ceiling fan where there is an existing wire, that is assuming that you are installing the fan where a light fixture was, then you do not need the extra wiring and electrical components such as the switches, simply because they are already installed. This will result in a lower installation cost and might end up costing about $200.

How to Install a Ceiling Fan Where No Fixture Exists 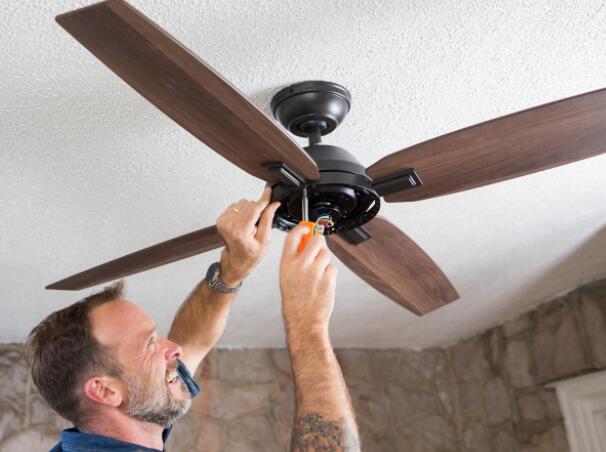 How Long Does It Take to Install a Ceiling Fan?

How hard is it to install a ceiling fan?

Installing a ceiling fan is not hard, all you need is to follow easy installation instructions and take into consideration the manufacture’s precautions.

Do I Need an Electrician to Install a Ceiling Fan?

Installing a ceiling fan is a job that you can do it yourself, however, that depends on the situation when installing the fan. If you are installing a fan where a light fixture was previously installed and you do not do new wiring then you can do it yourself. However, if you have a complex ceiling fan to install that requires new wiring to be done then you probably require a licensed electrician to do it for you to ensure that your do not overload your electrical system.

How to Install a Ceiling Fan with Remote?

Old ceiling fans that use pull chains can be modified to use a remote. To achieve this you must ensure that you have a transmitter and a receiver. Most ceiling fan with remote controls in the market are marked as branded as universal meaning they are compatible with most ceiling fans.

Can I Install a Ceiling Fan Where a Light Fixture Is?

How to Install a Ceiling Fan Box?

When installing a ceiling fan box is crucial to ensure that the junction box is strong enough to support the ceiling fan, if not, it should be replaced by a stronger support brace. 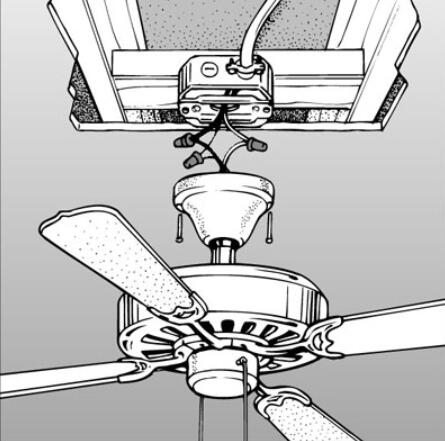 Here are the most common ceiling fan installation problems and how to fix them.

i. The fan wouldn’t start.

If you have turned on the power supply to the fan and it still wouldn’t start, then there has to be a problem with the wiring. Confirm if you have the done the right connection, otherwise, contact an electrician.

If your fan makes a lot of noise then there might be loose parts in its overall structure, ensure that all parts are tightly fitted. If the fan is still noisy check for cracks on the blades or the fan frame and replaces the broken parts.

If the fan light doesn’t turn on, then ensure that there are no burnt light bulbs or frayed wires.

iv. Fan switches off and on

If your fan keeps turning off and on then you might need to check for loose connections that might be breaking and connecting the circuit.

Ceiling fans are a great investment for anyone regardless of how complex the installation process may turn out to be. At times ceiling fans with a simple design that you can easily install yourself are much better than purchasing a complex design that requires added cost to install.