Important Factors that Determine How Much to Hang a Ceiling Fan

The main factor in the cost of hanging a ceiling fan is the size of the fan. Basically the larger the fan the more work needs to be done to hang it from the ceiling, Large fans will almost certainly require larger fittings and more time to be fitted. All fans need the correct wiring and an on-off unless you are wanting to have an existing ceiling fan upgraded to a better or a bigger version.

Will a professional have to install the fan?

The time frame in, which you need to have the ceiling fan could also have an impact on the final cost of having it hung by a professional to fit the fan for you. The average time taken to hang a ceiling fan is 1.5 to 2 hours, though some installations will take less time and others take more time. Generally, contractors will charge per hour to cover the cost of their labor, so 2 hours at $50 would cost you $100. Current hourly rates for hanging ceiling rates are roughly from $50 to $75 per hour. If you are quoted less wonder about the quality of the work, if quoted more then look for a lower quote.

How Long Will the Installation Take?

Another factor to be considered when working out the cost of hanging a ceiling fan is how long it will take to get the job done. If the professional you hire charges by the hour then the longer it takes the more it will cost.

On the other hand, a minority of contractors will charge a flat rate for the job and that will be the next price paid regardless of how long it takes to complete the work. Contractors should advise you of whether they charge by the hour or a flat rate when they provide a quote for the work. If they do not provide such information then ask them to clarify it for you.

Charging by the hour gives you a rough indication of the cost of hanging a ceiling fan assuming that contractors that provided a quote will have mentioned their hourly rate. Assume that the job will take two hours, so that will be 2 x the hourly rate, plus any call-out fee, and the cost of the fan if your contractor agreed to supply the ceiling fan.

It Will Cost More with an Electrician

There may be a cost for fitting new wiring and an on-off for the ceiling fan as well, which on average costs between $50 to $150. Therefore the cost of hanging a ceiling fan can vary by hundreds of dollars depending on the length of time it takes, whether an electrician is needed as well as the contractor hanging the ceiling fan itself.

Ways to Reduce the Cost of Installation 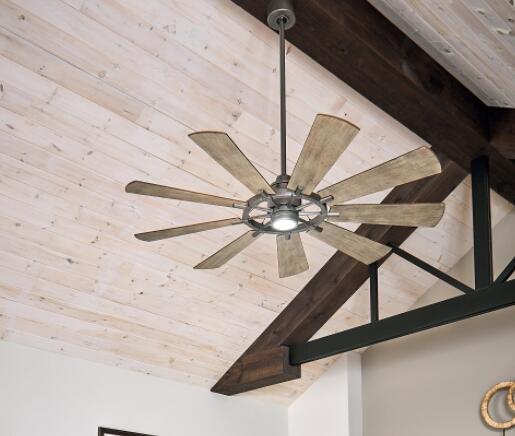 You can reduce the cost of hanging a ceiling fan by paying the contractor to obtain the ceiling fan, which you prefer. This is because the contractor should be able to buy the fan at a discount or a wholesale price. Often contractors can have a wider selection of ceiling fans to pick from than you would by going to an electrical or hardware store.

Another advantage of selecting a ceiling fan that the contractor then orders on your behalf is that they can also buy any attachments or fittings that are required to make sure that the fan is installed correctly and will work properly. That approach makes more sense than picking a fan that will need for fittings and will be more complicated or time-consuming to hang from the ceiling.

Then are some extras that add to the cost of hanging a ceiling fan, such as a mount, and also a downrod. If this is the first ceiling fan to be fitted into a room then these would be the first mount and downrod. If a replacement or larger ceiling fan is being hung then the existing mounts and downrods could have to be replaced, adding to the cost of hanging a new fan from the ceiling. Mounts are generally inexpensive costing no more than $15. There is a greater variation in the prices of downrods, which start around the $5 mark and can be as expensive as $80 each.

However, you may opt to go for the cheapest quote, or you could opt to pick a more expensive contractor with better reviews, who seems more capable of providing a higher quality of the installation. The time it takes to complete the job is usually the main factor in determining the amount it costs to hang a ceiling fan, then it is the hourly rate of the contractor and any electrician used to complete the job.

So a better contractor could cost you more per hour, yet they could do a better job in less time meaning that they cost roughly the same as a contractor who charges a lower rate.

choose the ceiling fan by yourself

So if you buy the ceiling fan yourself, no new wiring or fittings are needed and it only takes the contractor an hour to hang a ceiling fan then the whole thing could cost as little as $50. Conversely, if the contractor picks the fans, an electrician is needed, and the most expensive settings have to be used, and fans are hung in a few rooms then it could cost as much as $3,000.

Assuming that you want the largest ceiling fan, new wirings and fittings have to be put in by the contractor and an electrician then hanging a ceiling fan could cost around $500 to $700.

Energy Efficient Ceiling Fans Will Save You Money

Ceiling fans, especially the low energy fans are more economical for cooling your home than other methods. For instance, ceiling fans would cost less to keep every room cool than using an air conditioning unit. Besides installing air conditioning units would take longer, cost more, and cool cause more disruption.

Hanging ceiling fans will eventually cost less than using a few desks fans in every room to get cool and to stay that way. A ceiling fan cools the entire room, while desk fans cool more limited areas, even when they are set to swivel around.

Ironically switching ceiling fans on their lowest settings can actually lower your heating bills during winter. This is because warm air rises up to ceilings, where it does nothing to keep either you or your home warm. Switching the fan on pushes that heat back down to ground level and keeps your home warmer. This means you could turn the thermostat lower and still be as warm, saving on heating costs. 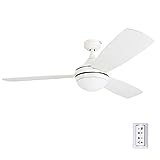 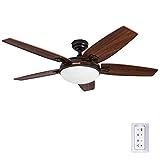 Therefore several factors have an influence over how much it costs to hang a ceiling fan on your property. The cost of hanging a ceiling fan can vary by a few hundred dollars, depending on the size of the fans, whether new wiring, fittings, and switches are required, and if an electrician is needed in addition to the contractor who will be hanging the fan.

If everything is straightforward and a contractor can hang a ceiling fan that you brought in an hour without having to do anything else then it could cost as little as $50. At the other end of the scale, to fit a large ceiling fan in a few rooms, adding new wirings and fittings, with the contractor needing the assistance of an electrician could cost as much as $3,000.

Remember that ceiling fans could keep you as cool as air conditioning at a lower cost and much less disruption during installation.